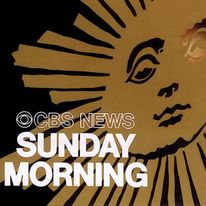 October 3rd, correspondent Lee Cowan’s feature about Pulitzer prize winning author Anthony Doerr drew me in because I’m a new writer and willing to learn from whomever. In that quest, I’ve watched most of the authors featured on Masterclass and have read more books in the past year than ever before. Time to learn from Anthony Doerr.

We witnessed Doerr’s process for writing his latest novel, Cloud Cuckoo Land. There were boxes of research and the hand drawn map used to follow and connect his one hundred-five characters spanning from the 1500’s to the twenty-second century.

A large part of the setting for his latest novel was in his home state of Idaho. He wrote of lakes and forests full of ageless Ponderosa pines that, in the novel, are not as ageless as once thought, referring to how climate change is affecting the planet. Anthony said, “...if this is the largest issue of our time then it would be irresponsible for me to not represent it in a novel in some way.”

Climate change is the largest issue of our time on Mother Earth. However, I believe the most important issue in America of these times is the spread of lies and misinformation. It’s caused an undeniable division in our society and the responsibility lies directly with the late President, Ronald Reagan.

After the democratic House and Senate passed the Fairness in Broadcasting act of 1987, Mr. Regan vetoed the bill and there weren’t enough votes to override his veto. Thus ended the Fairness Doctrine, the FCC rule requiring equal time for contrasting points of view.

Without the Doctrine, lies were made legal without debate. Conspiracy, falsehoods, misinformation, spewed by those who’ve realized these positions gather an audience which garners ratings and creates big paychecks. After thirty-four years, this country is divided like never before. That’s why I write about the Fairness Doctrine.

My first short story on the topic, The Death of Fairness, told the tale of what happened to a small American town, and it’s only radio station, after Reagan’s veto rescinded the Fairness Doctrine. Since it’s release, I’ve personally placed the book into the hands of young Americans at coffee and fast food drive-throughs. The book has been in MMJ dispensaries, at hair salons and barber shops. The feedback is always the same, “There was a time when you couldn’t lie on the radio?”

I’m often a guest on podcasts where hosts are surprised when I explain the Presidential veto that is responsible for the division in our country. People are simply not aware of this fateful decision.

My second book on the topic is the story of Molly Mellissa Alvin.

Molly and Bonnie see the writing on the wall, a President’s veto would signal the loss of truth and trust. Eventually, truth and trust weren’t the only things lost. Labeled as, “More than a student, more than a prodigy.” Molly sets her sights on the return of the Fairness Doctrine.

I expose my books to young people because it’s my hope that someday, some young woman/man will read Bonnie’s Law, The Return to Fairness and realize we could go back to the days before lies were made legal. It's a legislative process. We need the older generations to step aside and let the future of our country take the lead.

We should probably let them deal with Climate Change too.

Bonnie’s Law, The Return to Fairness will be available soon! Big thanks to my partners at MindstirMedia.

I’ve been watching Ken Burns documentaries on PBS since his first, The Civil War.  The Muhammed Ali doc is another of my faves. I sat in the kitchen of my parents home in the 1960’s listening to Ali fights on an AM radio and followed him throughout his career. I didn’t learn anything that I wasn’t already aware of. I was, however, brought back to the pain and agony I felt watching white people abusing blacks. I’ve seen videos of this all my life and it still hits me hard, especially knowing what little progress the American society has made. The racial divide may be larger today than in the days of the young Mohammad Ali.

I’m not sure when my distaste for the loudmouth boxer turned to admiration of the Champ but one thing is sure, Muhammad Ali was the Greatest of All Time! As Bob Dylan said, “If the measure of greatness is to gladden the heart of every human being on the face of the earth then he was the greatest.” I loved the good in Muhammed Ali.

At least once a week, I need a dinner that is simple to prepare and a treat to eat. Look up Rachael Ray’s “Chicken Toes” recipe. My kid loves her chicken nuggets or strips and this tasty rendition is something both you and your kid will love. Check it out!!

This past memorial day, we were, as a country, just starting to come out of our Covid19 fog. CBS television did a story about American trumpet players who were collectively playing Taps at 3pm across the country.

I was a trumpet player from fifth grade until I attended Southern Colorado State University as a music major in 1973. By then, the radio bug had already bitten and my trumpet playing was exchanged for playing Top 40 songs on the radio. But I’ve challenged myself.

I’ve committed to be ready to play Taps next Memorial Day. My plan is underway and I’m pleased to announce, I won’t suck.

Come Get Me Mother, I'm Through!